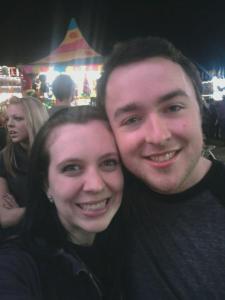 Josh and I met in June 2011. I was working the night shift at IHOP, and he came in around 2 or 3 a.m. with a group of friends. It was the usual boring week night, and they were my only customers. His friend left a number, and I texted it later that night, and we (Josh’s friend and I) made plans to hang out later that week. The next week, I met both of them at the pool at my apartment complex, and Josh and I just clicked. We had a lot in common, and I went home saying “Josh said [this]” and “Josh said [that].” My sister totally called that we would date, but I denied it.

Within just a few weeks, we were spending a good deal of one-on-one time together. I was amazed at how much we had in common: a love of classic Disney movies, similar (former) high school activities–most of all, the exact same fast food orders. (Josh always tells me he knew he was in love when I ordered the #10 at McDonald’s with honey BBQ sauce and a blue Powerade.)

We’ve been together since July 12, 2011. (I’ve posted about our 1-year anniversary and a little about how we celebrated.) Now, I can’t imagine (or don’t want to imagine) a day without him in my life. That’s why we moved in together in July 2012. I can’t wait to see what adventures we share.

Read more about him here.