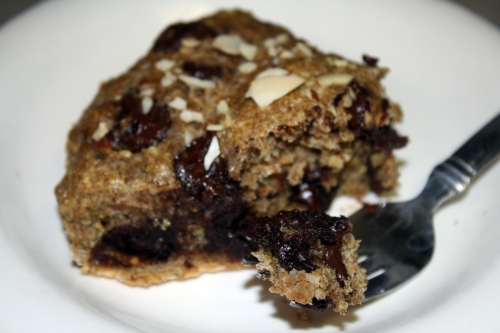 Sunday felt like a breakfasty day (like most Sundays in our home do). I really wanted to whip up some sweet scones, but every recipe I could find called for a stick of butter and at least ¼ cup of sugar (some even called for ½ cup of sugar). 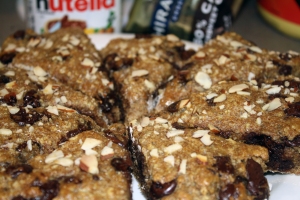 After pouting at the iPad screen for a few minutes, I decided to try to make my own scones. After a little research (via Pinterest, of course), I felt like I was ready to start preparing a recipe.

I was pretty concerned about the health factor (seeing as how I just finished talking about staying heart-healthy). I decided to make these as health-conscious as possible.

Some of the main things I wanted to make sure this recipe included were 1) minimal butter 2) no added sugar, 3) super-dark chocolate, 4) whole wheat flour and 5) oats. I know that’s kind of a long list, but I wanted to make sure my scones were as close to healthy as a sweet scone can be. (If I had ground flax-seed, I would have included it, too, for additional fiber.)

Though I was able to omit any added sugar (good thing, too–the chocolate makes it plenty sweet), I had to add more butter than I wanted. My initial goal was a mere 2 tablespoons of butter, but I ended up going with 4 tablespoons instead for consistency (the dough was too thick and immobile without it).

Even so, these scones don’t taste uber-buttery. They taste very, um, scone-like. They’re kind of dry (which I love in a scone), so if you don’t like that, just add another tablespoon or two of butter.

Did I mention these are fairly easy to make? And really pretty too! (I think they’d look nice sitting by a cup of coffee.)

In a large bowl, combine flour, oats, baking powder, baking soda and salt. Add butter cubes, using your fingers to rub the butter into the dry mix until the mixture resembles coarse breadcrumbs. (If you have a pastry mixer, using it would probably speed up this step.) 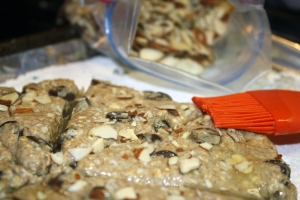 In a separate bowl, combine milk and egg yolk; whisk until well-combined.

Make a well in the flour mixture, and pour the milk mixture into the center of the well. Use your fingers or a rubber spatula to fold the mixture until it starts to come together. (I found that making a blade with my hand to fold the mixture was much easier than using a kitchen tool.) Add the chocolate chips.

Gently knead the dough with your hands until just incorporated. Be careful to not overmix.

Roll the dough into a ball and place on the center of a floured cookie sheet (I used all-purpose flour for this). Use the heel of your hand to gently press the dough into an approximately 8-inch-diameter disk.

Using a floured pizza cutter, cut the pressed dough into 8 pieces, but do not separate them.

Brush egg whites onto the top of the dough. (I don’t suggest dumping it on top. I did, and I ended up with what looked like an egg white omelette on top of one of my scones.)

Use your fingers to crush the sliced almonds in the palm of your hand. Sprinkle the almond bits over the top of the dough.

Bake for 15 minutes. Once the scones have finished baking, let them cool for 5-10 minutes before moving them to a room-temperature plate or cooling rack.